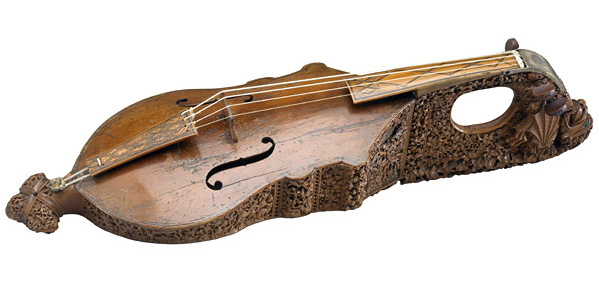 
The British Museum citole (formerly known as the Warwick Castle gittern) is one of a small handful of medieval stringed musical instruments to have survived, providing an invaluable link between iconography and reality. Equally, it is important as one of the most extraordinary examples of craftsmanship and decorative arts from the 14th century, prominently displayed in the Museum’s recently renovated Medieval Gallery.

A rich post-medieval existence is indicated by an engraved silver plate which links the instrument to Queen Elizabeth I and her favourite, Robert Dudley. The instrument was modified into a violin, receiving a new soundboard, fingerboard, tailpiece, peg arrangement, and other fittings. The history of these later accretions yield valuable insights into the violin and violin making in Britain.

This is the first international symposium on this unique instrument, and celebrates recent work done by scientists at the Museum as well as significant new research by scholars in many fields.  By taking as its focus the single extant instrument, this symposium will promote research and discussion about a number of diverse topics.

In addition to the core event of the citole symposium, other related events are planned to coincide with it. These events include: a concert featuring citoles, an early instrument study day at the IMR, two small iconography sessions at the British Library, and a visit to Blythe House to see the electrotype copy made of the citole in 1869. Additionally, the Greenwich Early Music Festival takes place the following weekend, November 12-14.